What Really Happens In A Law School Classroom? [VIDEO] 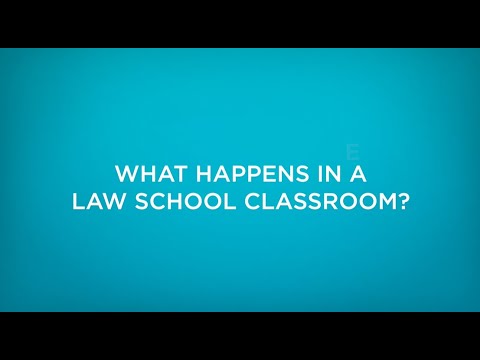 I’ve got three teenagers. They are pretty good kids, most of the time. They do well in school, are passionate about social issues and have a drive not only to succeed but to excel in every task.

Now, I’m not your typical helicopter parent – in fact, I almost weekly pass kids the number of a local Family Law attorney and invite them to start the emancipation process! I think that real growth comes from allowing your children to fail (when it doesn’t matter) in order to help them to fully appreciate what it takes to succeed. So, I view my job then as an advisor – using my experience to advise my kids when/where they need to really freak out, and when they can simply do their best without regard for the consequences. There’s a mantra in our house: “If it won’t matter five years from now, we’re not going to worry about it.”

If It Won’t Matter in 5 years, Don’t Sweat It

I’m happy to report to you, the entering law student, that what happens in your 1L law school classroom will not matter five years from now. Feel better?

I’m always amazed by how the law school classroom has every entering 1L quaking in their boots. Every summer, a common concern among the vast majority of students who attend Law Preview is “surviving” law school classroom discussions. I’ll tell you what I tell my students – if it has no bearing on your GPA (which it doesn’t), then you shouldn’t spend a whole lot of time worrying about getting called on in class.

Here’s the truth: In law school, your grade will likely be determined by your performance during a 3- or 4-hour examination at the end of the semester. That’s it. So whether you get called on in class, or whether you correctly identify the issue or the court’s reasoning in a particular judicial opinion, is not going to be outcome determinative. I’ll take it one step further and say that even if you completely knock it out of the park during a Socratic assault by your professor – and answer every question correctly – the anonymous grading system employed at most law schools will likely mean that your stellar performance will go unnoticed when grades are released at the end of the semester.

So, if classroom performance doesn’t impact your grade, what is it about law school classrooms that have people so freaked out? Well, I assume that at least part of it goes back to the oft-cited fact that people fear public speaking more than death; nobody ever wants to look like a fool while grappling with some pretty complex materials in front of a room of their peers.

What to Expect (and What’s Expected of You)

To allay some fears and provide some useful insight, I thought I’d take a moment to address what to expect (and what’s expected of you) in the law school classroom.

Legal education is the original “flipped classroom” – students read a series of cases and come to class prepared to discuss their significance with respect to a particular body of law. Notice I used the word “discuss” because unlike what you may have experienced in undergrad, law school professors rely less on lecture and more on classroom discussion for illustrating the law.

Using the Case Method, your professor will engage in a cumulative study of the law. You’ll show up for class having read one or two cases (judicial opinions) in a subject (say Contracts) and your professor will lead you (or a classmate) through a discussion that boils the case(s) down to a fine point of law. Then, you’ll read other cases that will build upon the law that you’ve already learned. So, absent a “big picture” understanding from the outset, it won’t be until the end of the semester when you’ll finally understand how the various rules of Contract law fit together.

The professor’s goal in this process is twofold. First, they want to use the assigned cases to demonstrate for students how the law has evolved over centuries. Second, they are helping students discern between legal rules (which are very easy to memorize) and a court’s reasoning which brought them to their decision (a little harder to unearth). Now for the fun part: Once the professor gets you to a point where you have a baseline understanding of the law’s evolution and how the judicial opinion you’ve read extends a particular rule of law, your professor will begin to test your understanding of that rule with different hypothetical fact patterns where the court’s rule and/or reasoning will survive or fail.

What’s Expected from You is Simple: Come to Class Prepared

As a student, what’s expected from you in a law school classroom is simple: come to class prepared. Your professor (and classmates) will have expected that you have thoroughly read and wrestled with the assigned cases. If you simply skim your readings and come to class seeking to have the professor explain their significance, prepare to be LOST and, worse, waste everyone else’s time. There’s no spoon-feeding in law school; instead, your professor is going to assume that you’ve achieved the “baseline” level of understanding on your own and then proceed to direct a deeper discussion from there.

Again, because classroom performance has no bearing on the overall grade you receive, don’t sweat it.  Just come to class fully prepared and ready to engage – whether or not you end up in the “hot seat,” you’ll be in a position to appreciate the roller coaster ride your professor has in store for you!

By taking a 1L summer prep course with Law Preview, you’ll learn what to expect in a law school classroom and a lot more. The Law Preview 6-Day Course covers everything from core 1L material to exam strategies and best practices. It only takes six days this summer to learn how to become a top law student.